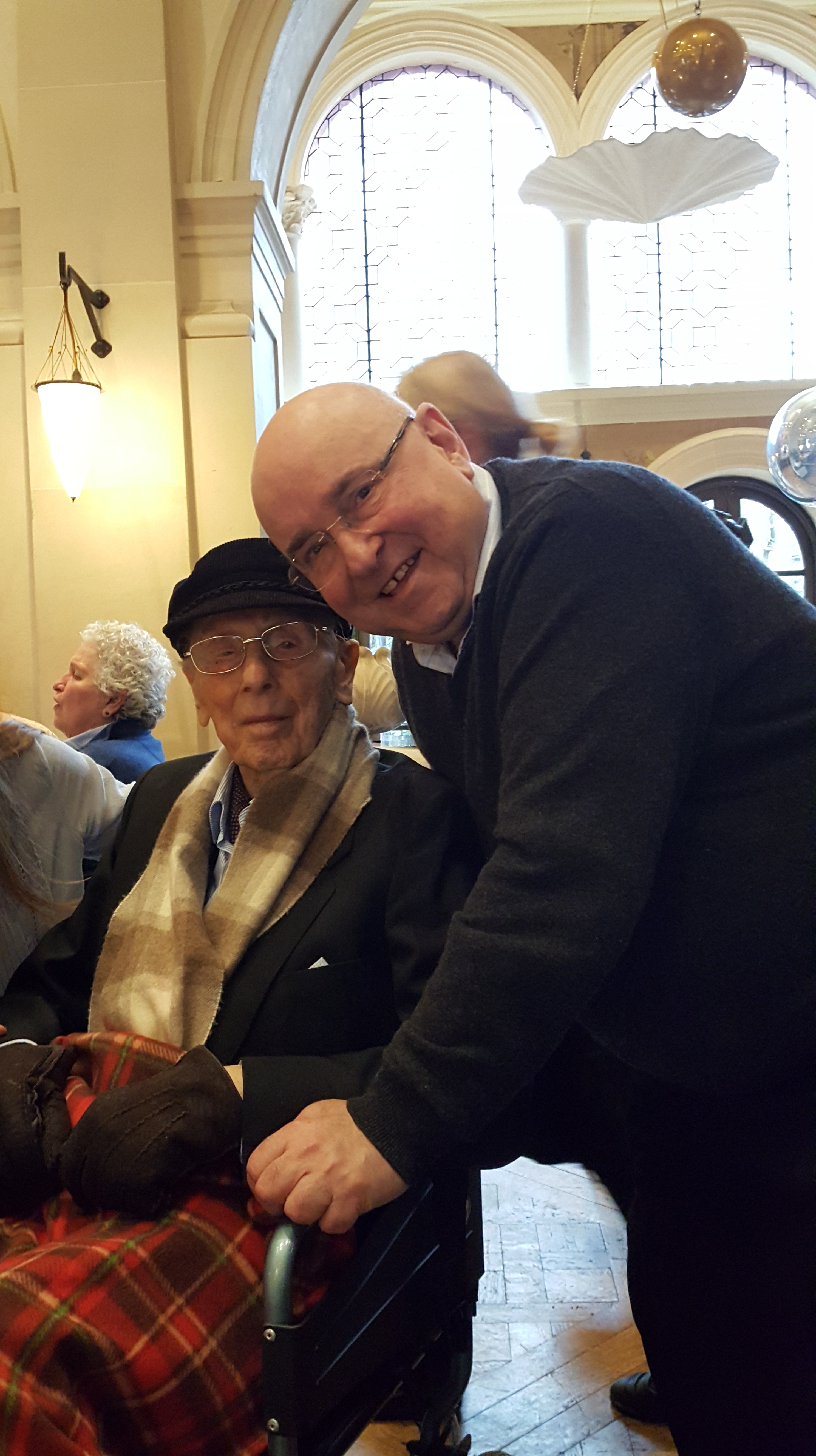 I’d like to share a family celebration with you, the 100th birthday, last Tuesday, of my uncle Donald (Zec), one of eleven siblings born to Ukrainian Jewish immigrants, all the other siblings now passed (including my own mother). Donald’s celebrity, principally as the Daily Mirror’s film critic, brought him to the grateful attention of millions. His interviews included amusing and often perceptive dialogues with Marilyn Monroe, Frank Sinatra, Elvis Presley, James Dean, the Beatles and many others. But rather than add to accolades already voiced at his birthday party and elsewhere and/or appreciations from the party table by Howard Jacobson, Don Black, Michael Grade and, as expected, Her Majesty (the latter two via letter) – I would like to pay tribute to Donald’s support of me, personally.
It began in the early sixties when he got wind of the fact that I’d fallen in love with classical music. One Sunday lunchtime he and his lovely (late) wife Frances turned up at our front door, whisked me off to their home where they fed me my favourite meal (still is – egg & chips!), enthused about music and played me records. Delivering me back home afterwards they gifted me a generous pile of 78s (still a currency of the recording medium in those days), including the whole of Smetana’s Má vlast, already a firm favourite, and so I was guaranteed hours of pleasurable listening.
But that wasn’t the most significant of Donald’s prompts. Years later, when I started to make modest headway along the career path I’m currently following, Frances phoned and invited my wife and I for a meal with a view to marking a certain level of progress on my part. Both meal and meeting were a triumph. Donald and Frances were affectionate, encouraging, amusing, enquiring, compassionate, in fact everything you’d want of older relations, the sorts you’d be proud to credit as being your ‘uncle and aunt’. And so our relationship blossomed into true friendship, past Frances’s tragic passing into Donald’s late phase of creativity (ie, in his eighties and nineties) – which meant learning to sight read and play on the piano pieces that Frances had played to him (Bach, Mozart, Beethoven, Chopin), more prose writing (as well as verse), painting (with oils and, later, Ipad), sculpting and engaging in rigorous conversation concerning politics and current affairs. Our emails and phone calls are frequent, our personal encounters perhaps less so, but still immensely nourishing. Donald’s humour is still a given, with too many vivid examples to relate here – except maybe one occasion when I phoned him at lunchtime to check things out, asked him whether he was eating and he shot back, quite spontaneously, ‘who’s this … the Yom Kippur police?!’ His love of music was always uppermost in our conversations, mostly concerning great violinists. When younger he’d played the violin himself and took loan of my cello for a while 25 or so years ago.

So, how to sum him up? A renaissance man who loves family, culture, intellectual and creative challenges, tradition, and relating to people (as Don Black said he’s still making new friends), and who is endlessly curious about all aspects of life. Are these specifically ‘Jewish’ qualities? Not at all. But there is surely something about this mélange of virtues that you can identify with numerous distinguished Jews – think of Jacob Bronowski, George Steiner, Ludwig Wittgenstein, Jonathan, Lord Sacks, Daniel Barenboim, Leonard Bernstein, Bronislaw Huberman and others. And Donald definitely has a keen sense of his own Jewish identity, something worth remembering especially now when anti-Semitism is once again lurking in the shadows of our society. So in closing I would say that not only am I grateful to be Donald’s nephew, but because of him, I’m also very happy to be Jewish.

20 thoughts on “Celebrating Donald Zec on his 100th birthday”